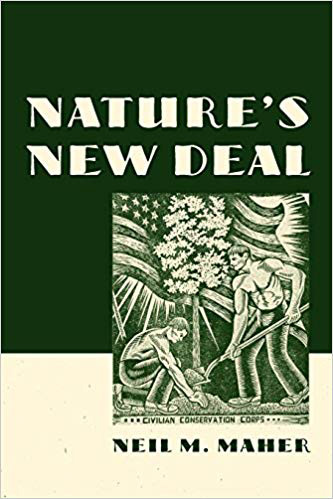 The Great Depression coincided with a wave of natural disasters, including the Dust Bowl and devastating floods of the Ohio and Mississippi rivers. Recovering from these calamities–and preventing their reoccurrence–was a major goal of the New Deal.

In Nature’s New Deal, Neil M. Maher examines the history of one of Franklin D. Roosevelt’s boldest and most successful experiments, the Civilian Conservation Corps, describing it as a turning point both in national politics and in the emergence of modern environmentalism. Indeed, Roosevelt addressed both the economic and environmental crises by putting Americans to work at conserving natural resources, through the Soil Conservation Service, the Tennessee Valley Authority, and the Civilian Conservation Corps (or CCC). The CCC created public landscapes–natural terrain altered by federal work projects–that helped environmentalism blossom after World War II, Maher notes. Millions of Americans devoted themselves to a new vision of conservation, one that went beyond the old model of simply maximizing the efficient use of natural resources, to include the promotion of human health through outdoor recreation, wilderness preservation, and ecological balance. And yet, as Maher explores the rise and development of the CCC, he also shows how the critique of its campgrounds, picnic areas, hiking trails, and motor roads frames the debate over environmentalism to this day.

From the colorful life at CCC camps, to political discussions in the White House and the philosophical debates dating back to John Muir and Frederick Law Olmsted, Nature’s New Deal captures a key moment in the emergence of modern environmentalism.

“Maher’s history offers inspiration for those seeking visionary solutions to our own ecological and economic troubles, but he also reminds us that to succeed, any environmental policy must reckon with our history of compromise.”

“Maher uses the CCC to make a sophisticated argument within the field of environmental history in the United States. He argues, in effect, that it is the missing link between the simple conservation of the Theodore Roosevelt era, and the environmentalism that emerged after the Second World War.”

“This is an ambitious and imaginative book that opens new terrain for historians to explore. By rethinking the trajectory of conservation, Maher compels us to reconsider the history of modern environmentalism as well.”

“Nature’s New Deal belongs on every environmental historian’s bookshelf, but it also speaks beyond our field to not only American historians in general but also to environmental activists and general readers.”

Green New Deals: Past and Future