Apollo in the Age of Aquarius 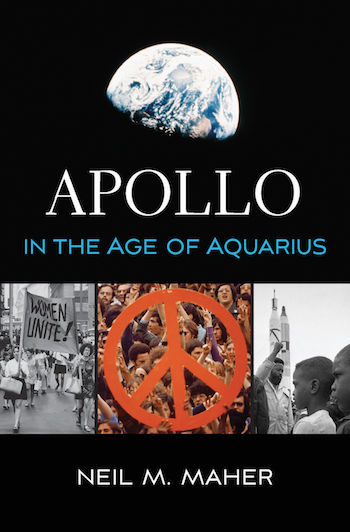 The summer of 1969 saw astronauts land on the moon for the first time and hippie hordes descend on Woodstock for a legendary music festival. For Neil M. Maher, the conjunction of these two era-defining events is not entirely coincidental. Apollo in the Age of Aquarius shows how the celestial aspirations of NASA’s Apollo space program were tethered to terrestrial concerns, from the civil rights struggle and the antiwar movement to environmentalism, feminism, and the counterculture.

With its lavishly funded mandate to send a man to the moon, Apollo became a litmus test in the 1960s culture wars. Many people believed it would reinvigorate a country that had lost its way, while for others it represented a colossal waste of resources needed to solve pressing problems at home. Yet Maher also discovers synergies between the space program and political movements of the era. Photographs of “Whole Earth” as a bright blue marble heightened environmental awareness, while NASA’s space technology allowed scientists to track ecological changes globally. The space agency’s exclusively male personnel sparked feminist debates about opportunities for women. Activists pressured NASA to apply its technical know-how to ending the Vietnam War and helping African Americans by reducing energy costs in urban housing projects. Particularly during the 1970s, as public interest in NASA waned, the two sides became dependent on one another for political support.

Against a backdrop of Saturn V moonshots and Neil Armstrong’s giant leap for mankind, Apollo in the Age of Aquarius brings the cultural politics of the space race back down to planet Earth.

Best Book on the Apollo Program and Moon Landing (2019)

“NASA and Woodstock may now seem polarized, but in this illuminating, original chronicle, historian Neil Maher traces multiple crosscurrents between them.”

“The narrative is lively and often elegant, richly detailed, and draws on research from a wide range of archives and media (cartoons, ephemera, songs, alternative newspapers, and more).”

“Apollo in the Age of Aquarius is a cri de coeur, exhorting environmental historians not only to appeal to non-specialists but also to take on the big topics of the historical profession.”

The Rise and Fall of Newark's Beer Industry: An Environmental Historoy